My two favourite posts from September had a common theme: refractive index. Demonstrating Refractive Index, a video of a neat refractive index magic trick, made it to the top of reddit’s r/science subreddit, and My Favourite Photograph from the Olympics continued the refractive index theme, looking at a neat demonstration of total internal reflection.

Surviving Acceleration is a neat post that I’ve referred to on many occasions in my teaching, especially when trying to explain the usefulness of logarithmic graphs, and I’ve also gone back to Tog a number of times, especially when looking at the mathematics of thermal energy transfer and Newton’s Law of Cooling.

How are Mushroom Clouds Formed? answered a question I’d always wondered about, and is something that I point people towards when they (understandably) assume that mushroom clouds and nuclear weapons are intrinsically linked.

An excellent podcast inspired Solved Games, and a couple of interesting papers from the arXiv inspired Earthquake Cloak, a post about shielding buildings from earthquakes. I wrote about Blood Types because I was teaching the topic at the time.

December saw a rare non-science related post as I got obsessed with publishing for BERG’s Little Printer and I finally got around to finding out why resistors have strange values. I also wrote about mach cones and fission-fragment rockets.

In January I looked at Gravel Gerties, which are used for the manufacture and maintenance of nuclear weapons, and Whipple Shielding, which is used to protect spacecraft. I also wrote about a very old-fashioned pregnancy test and looked at GPS in Space.

There were no really outstanding posts in February, but I love the visuals of Rifling and have surprised a lot of people with the Energy Density of Coal.

I love Radomes, so it was inevitable I’d write about them at some point and I was also very interested by the Mean Centre of World Lighting. I found the topic of Depth Perception in Jumping Spiders very interesting, but I’m not sure I explained it particularly well.

April was a busy month, with a trio of posts about nuclear weapons: The Trestle, the Composition of Nuclear EMPs, and Critical Mass and Fizzles. I was also very pleased with a post about Google’s “Leap Smear“.

In May I finally worked out what the problem with Disk Drive Sizes is, and looked at the mysterious FOGBANK, as well as touching upon the risk of asteroid collisions and how satellites are pointed.

A post about Automatically Removing Objects from Photographs continues to get a lot of attention and I was also pleased with On the Emission of Light and Laser Gyroscopes.

July was a bit of an odd one, with a bunch of unconnected posts like Fish Ladders, the colour you see with your eyes closed and the Galileo Thermometer.

In August I finally worked out how cooling towers work and what Lagrange Points are, as well as writing a very popular post about bullshit marketing equations.

Every now and then a story appears in the media about how boffins (and it is always “boffins”) have worked out an equation for something: the perfect cup of tea, the most depressing day of the year, the best way to make pancakes, the perfect handshake, or in the most recent case, the perfect cheese on toast.

The Royal Society of Chemistry, whose boffins came up with the cheese on toast equation, really ought to know better, so to save any more of our august institutions from embarrassing themselves I have come up with an equation for the perfect bullshit marketing equation.

The equation for the perfect bullshit marketing equation
(rendered in

to make it look more sciency).

represents the amount of utter bullshit that this equation is. The subscript is there to make it look a bit more sciency.

represents public appeal, which has no sensible unit, and is squared because most people remember the squared symbol from when they were at school and it looks really sciency without being too threatening. The

term is also included because the

don’t kern properly for some reason and it will make graphic designers angry.

represents column inches, which has the unit of inches and is the only term with a unit, meaning that the final unit of utter bullshit is

which is, as expected, utter bullshit. It and the

term also represent the failure of bullshit equation-makers to understand that quantities in equations are only ever represented by individual symbols.

represents Not Understanding What An Equation Is. The lowercase subscript

represents failing to take a consistent approach to the use of subscript in bullshit equations.

represents Not Understanding Dimensional Analysis. It’s an uppercase delta because that symbol already has a well-understood meaning and there is therefore no reason to use it but it looks sciency and hey, we’ve come this far, right?

term because any equation worth its salt has got to have some pluses and timeses in, otherwise it doesn’t even look like an equation.

The pi-th root of the

term is used because by this stage it can’t make the equation any worse than it already is, nor any worse than any of the bullshit equations that have come before it.

is the Kronecker delta where

and is included because it looks really sciency whilst making absolutely no difference to the final result. The

terms were determined by rolling a die. I used the Kronecker delta rather than an Iverson bracket because I don’t really know what Iverson brackets are.

UPDATE: For how this post came about, check out this Storify story. 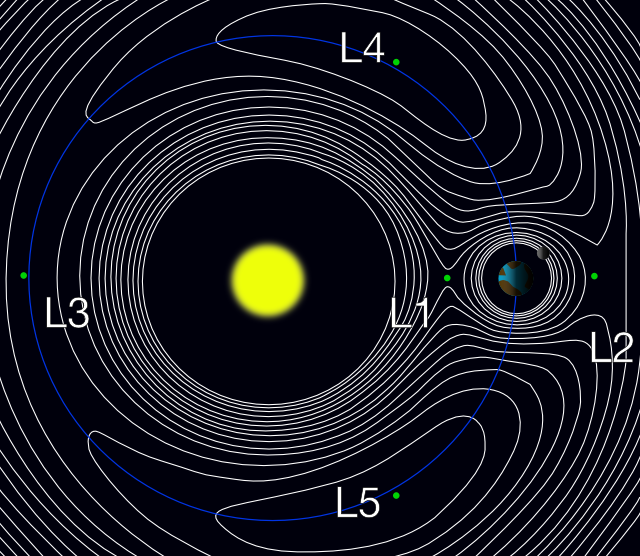 It is a common complaint that the adverts played during TV shows are louder than the TV shows themselves. This, however, is not the case: without adjusting the volume of your TV this would be impossible.

As an example, I took the first twenty seconds of Kalimba by Mr Scruff (one of the sample songs included with Windows 7) and compressed it.

The compressed version appears louder overall, but a comparison of their waveforms in Audacity shows that the loudest parts of both have the same volume.

The USA has enacted a law, the Commercial Advertisement Loudness Mitigation Act (CALM Act), which mandates that the average volume of adverts may not exceed the volume of the TV shows during which they play, which does away with this compression trickery.

Breaking length (also called self-support length) is a way of measuring the strength of a material; it is the maximum length of a column of a material that can support its own weight if it is anchored only at the top. For example, the breaking length of concrete is 0.44 kilometres, which means that if you constructed a 440-metre long column of concrete you could hang it from its top and it would support its own weight, but a 441-metre long column would break. 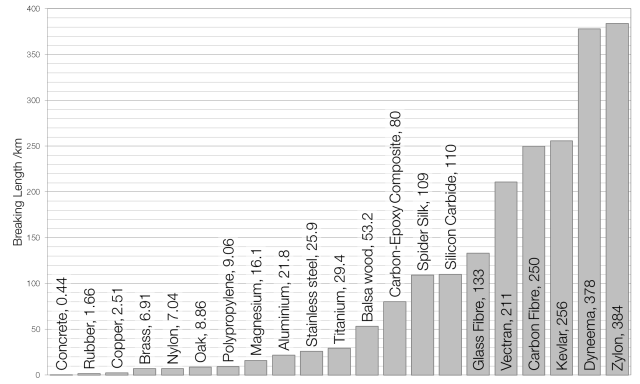 As you might expect, the top end of the list is dominated by materials that have been specially engineered for strength: