A soft bomb (also known as a “blackout bomb”) is a bomb designed to destroy electrical power infrastructure rather than physical buildings. The only known soft bomb is the US’s CBU-94 cluster bomb dispenser carrying BLU-114/B warheads (the finer details of which are still classified).

Once dropped by an aircraft, as it is falling, the bomb orients itself vertically and then discards its outer casing and begins spinning. Once it is spinning it releases two hundred drink can-sized submunitions, each of which contains thousands of tiny graphite fibres. A small explosive charge inside each submunition then detonates, scattering the graphite fibres like electrically conducting confetti and forming a “net” that drifts slowly downwards. When this conductive confetti lands on the target – an electrical transformer or substation – it causes thousands of explosive short circuits, starting fires and disabling the target. 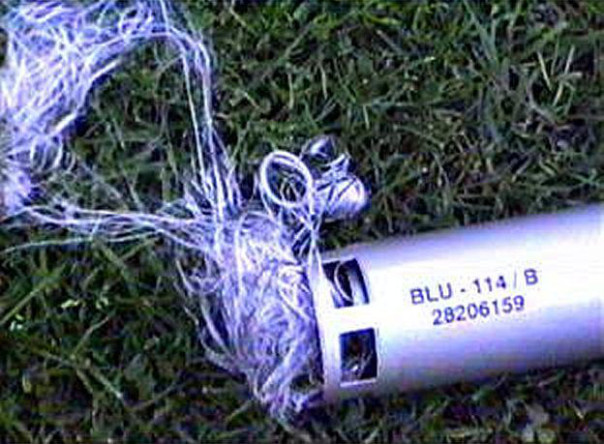 Soft bombs was first used in May 1999, as part of US operations in Serbia, in which night-time strikes by F-117A stealth fighters knocked out electricity to 70% of the country. They were then used again a few days later to undo repairs that the Serbians had completed. The photograph above comes from a video shot at the TPP Nikola Tesla power plant that was heavily damaged in the attack.

One thought on “Soft Bomb”