Walter Bishop from the TV show Fringe really is a mad scientist. 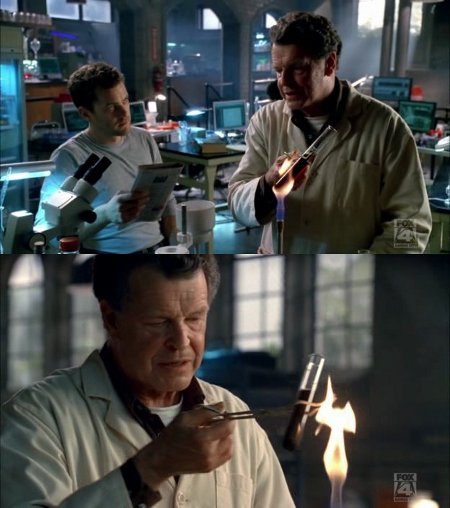 Why Walter is a Mad Scientist:

The yellow flame comes from incomplete combustion of a hydrocarbon fuel (in this case natural gas), resulting in the production of soot; if this soot is hot enough it will glow, producing the characteristic colour. Heating a test tube with a yellow flame will leave the test tube covered in a layer of this soot that will insulate the contents from the heat. It could also lead to contamination.

When using tongs it’s very easy to accidentally apply too much force and crack the test tube; test tube holders have the advantage that they “fail safe” – loosening your grip doesn’t result in the test tube sliding out, you have to push to release the test tube, not to hold it.

My issue with the safety goggles is, I hope, obvious.

U2’s new tour makes use of a very impressive shape-changing video screen designed by Chuck Hoberman. What piqued my interest was the images in this video of the screen in action: I’m pretty sure that they’re using photographs of particle tracks from a bubble chamber. 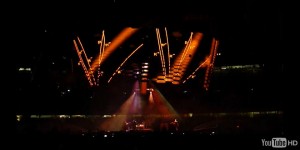 If you click on the image to enlarge it I’m pretty sure that you can see a neutral lambda baryon decaying into a negative pion and a proton on both the left and right of the screen.

The Nobel Prize for Physics 2009 has been awarded to Charles Kao for his “groundbreaking achievements concerning the transmission of light in fibres for optical communication” and Willard Boyle & George Smith for their “invention of an imaging semiconductor circuit – the CCD sensor”.

Half the award goes to Charles Kao for his work on the theory behind optical fibres that could be used to transmit information over long distances: 100km compared with the 20m possible beforehand. Every hour thousands of kilometres of fibre optic cable are laid worldwide, with enough fibre laid to encircle the Earth 25000 times, more than a billion kilometres.

The second half of the award is split between Willard Boyle and George Smith for their work in creating CCD sensors: the “electric film” that digital cameras use, scanners, medical devices and surveillance satellite all use CCDs.

A Unified Theory of Superman’s Powers