I am occasionally forced to teach some electronics. Looking recently at our resistor sets I was somewhat puzzled by the odd values involved. 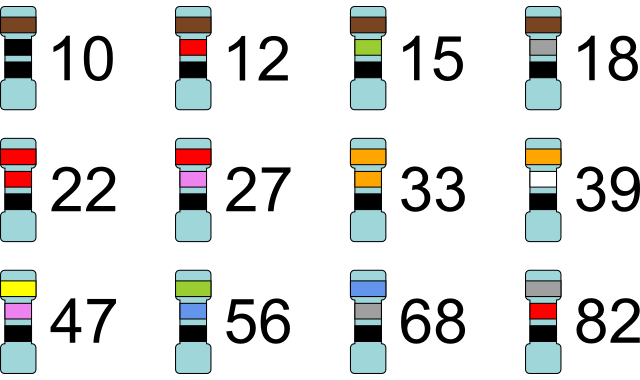 The reason for the choice of values is tolerance. The resistors in the E12 scale are guaranteed to be ±20% of the stated value, so with a starting value of 100 Ω it makes little sense to produce a 110 Ω resistor as this is already within the tolerance of the 100 Ω resistor; a 120 Ω resistor will be 144 Ω at most, so it makes sense for 150 Ω to be the next value.

The resistors in the E24 scale are guaranteed to be ±10% of the stated value, therefore twice as many values are needed within the scale when compared with the E12 scale. With a starting value of 100 Ω a 105 Ω resistor is unnecessary for the same reasons described above.

For use in schools it makes sense to use E12 and E24 series resistors, as we rarely require great precision in our resistors. But for other uses it’s necessary to use more accurate resistors: the E192 series contains 192 resistors and has a tolerance of just ±0.5% and resistors with even finer tolerances are produced for super high-accuracy applications, for example in defibrillators.