The term “firearm” refers to any sort of portable device that uses a barrel to fire a projectile, and they come in many forms. 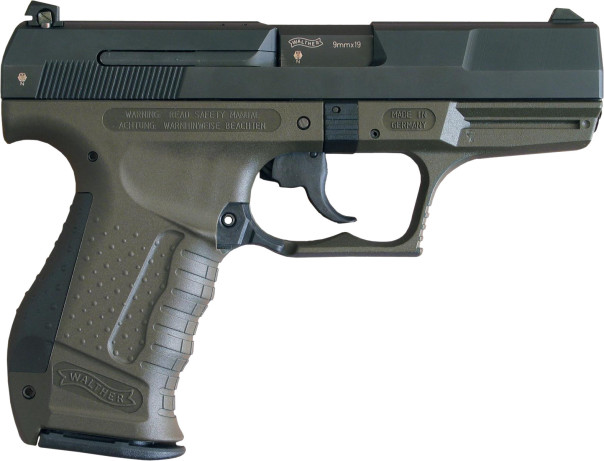 As its name suggests, a handgun is designed to be held only in the hand, without the use of shoulder support. They come in two basic types: pistols, like the Walther P99 above, which have the chamber that holds the bullet integrated into the barrel, and revolvers which separate the barrel and chamber (usually possessing six or more separate chambers).

Handguns are usually semi-automatic, which means that each time the trigger is depressed one round is fired. Some fully automatic handguns (usually referred to as machine pistols) do exist, in which the gun will continue to fire for as long as the trigger is held down until all the ammunition is expended, but these are rare.

A rifle is a firearm with a long rifled barrel; the long barrel and the rifling give the weapon increased range and accuracy.

An assault rifle is a selective fire rifle; this means that the weapon can fire in both semi-automatic and fully-automatic modes, and many assault rifles also offer a burst mode (usually a three-round burst) in which multiple rounds are fired each time the trigger is depressed. Assault rifles fire rounds that are between pistol and rifle rounds in terms of power, and use detachable magazines which hold around thirty rounds.

Assault rifles are the primary weapon issued to most armed forces, though most also issue a handgun as a backup side arm. Assault rifles were created when it was realised that most engagements occurred at ranges below the maximum range of battle rifles, and that a weapon in between the handgun and the battle rifle was required.

Battle Rifles fire full-powered rifle rounds, and thus have greater range than assault rifles, but because they are higher-powered they are more difficult to control in fully-automatic mode.

A carbine is a shorter and lighter version of an assault rifle (the H&K G36C carbine shown above is a version of the H&K G36 assault rifle). Because they are lighter and more manoeuvrable they are favoured where space is restricted (e.g. for use by helicopter pilots or armoured personnel vehicle drivers) or where high mobility is key, e.g. by special forces or hostage-rescue teams.

A sniper rifle is a high-power, high-precision rifle. Whereas assault rifles are designed for use at 300-400 metres, sniper rifles are designed to engage targets at ranges of 600-1000 metres and beyond (British soldier Craig Harrison holds the record for the longest confirmed kill at 2475 metres). They fire large calibre rounds, and are mostly bolt action, which means that the spend round is ejected and a new round loaded by manually opening and closing the barrel. They are usually fitted with high-magnification sights (10× and upwards).

Sniper rifles firing very large calibre rounds (such as the .50 BMG cartridge) are sometimes used as anti-materiel rifles, designed to render equipment unusable (e.g. by destroying the engine of a vehicle) rather than to kill people.

Snipers receive extensive training, and operate in teams of two. The sniper is accompanied by a spotter, whose job it is to identify targets and provide details such as range and wind that allow the sniper to make their shot, and who provide security for the team. The role of Designated Marksman was created as an intermediate role between a standard infantryman and a sniper – they receive less training than snipers and work as part of a normal squad, and use a designated marksman rifle which has better range than standard assault rifles but not the full range of a sniper rifle.

A machine gun is a fully automatic gun, and fires hundreds of rounds per minute, usually from a large ammunition belt or large magazine. It is usually much less portable than a rifle and is often mounted or used with a bipod support; and is usually operated by more than one person at a time (i.e. it is a crew-served weapon). Machine guns are often used to provide covering or suppressive fire, keeping an enemy at bay whilst soldiers change position. Some larger machine guns use rotating barrels, these are not usually man-portable and are more commonly found mounted to vehicles and aircraft.

A submachine gun is a machine gun that fires pistol calibre cartridges. It is usually smaller and much more portable than a machine gun. If it takes the form factor of a handgun it is referred to as a machine pistol. Submachine guns are popular with special forces due to the increased manoeuvrability they offer over assault rifles and because they are quieter when suppressed (i.e. used with a suppressor or “silencer”).

The PDW is a further evolution of the submachine gun. It is a hybrid cross between a submachine gun and a carbine,  offering the manoeuvrability and ammunition capacity of a submachine gun, but with the power and accuracy of a carbine. It is popular with those that require heavy firepower in a very small package and is often used as a concealed weapon.

Shotguns are similar in shape and size to rifles, but they do not have a rifled barrel. As opposed to all of the weapons above, a shotgun does not fire bullets, but rather a cloud of shot (small metal pellets) that spreads out as it leaves the barrel.

When used for hunting, shotguns traditionally have two barrels, either side-by-side or with one above the other. In military use, they are usually single-barrelled and operate by pump action, in which the next shotgun shell is loaded into the barrel by pumping the handle backwards and forwards. The military also uses fully automatic shotguns, which offer incredible firepower, but reduced range.