A pylon turn is a manoeuvre in which an aeroplane flies in a circle, banked with one wing pointed towards a fixed point on the ground.

Pylon turns were originally used in air racing, and are used extensively by military aircraft, as it allows them to easily and accurately direct fire onto targets on the ground for a long period of time. 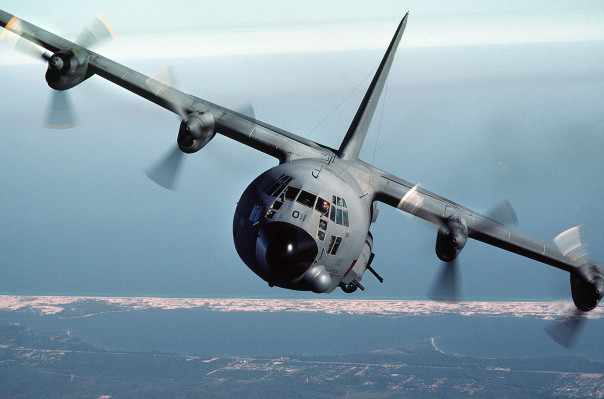 In the photograph above an AC-130 Spectre gunship is executing a pylon turn. The aircraft’s GAU-2/A miniguns and L/60 Bofors cannon are visible on the aircraft’s left-hand side, pointing towards the centre of the pylon turn. 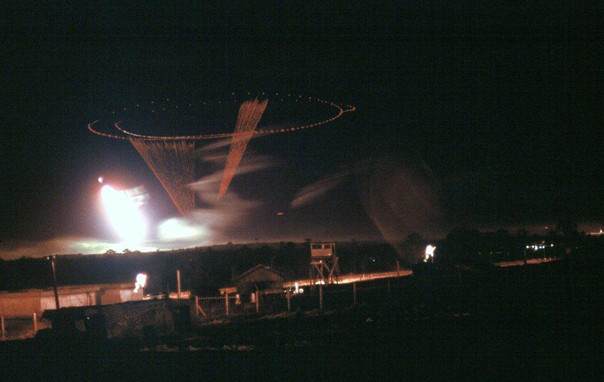 An AC-47 Spooky gunship executing a pylon turn whilst directing tracer fire against a target on the ground.

A pylon turn also allows for a procedure called long-line loitering, in which a container can be lowered to the ground from a moving aircraft, remaining stationary on the ground in the process. This enables delivery and retrieval of material without the aircraft having to land.

Patent drawings from US patent US3724817 A. Click to enlarge.

A drag cone (a small parachute) helps to pull the line into a loop, keeping it relatively stationary and allowing the far end of the line to drop to the ground. This technique has been used to retrieve personnel and even to deliver mail.