The Boomerang Shooter Detection System is a gunfire locator system, designed for use against snipers, that tells its user the location of a source of gunfire, allowing those under attack to return fire. The Boomerang system can be mounted to vehicles, and works at speeds up to 60 mph, or can be used in a stationary perimeter defence role.

Boomerang mounted to an armoured vehicle.

When a bullet is fired it makes two types of noise: a muzzle blast as the round exits the barrel, and a supersonic shockwave as it moves through the air. By measuring the differences in volume and in time between these sounds reaching each of its seven microphones, Boomerang is able to calculate the range, elevation and azimuth of the shooter’s (or shooters’) position and then displays this information to its user.

This method is the one that humans use to locate sounds, though we do not have the benefit of seven ears. The algorithms that Boomerang uses are more complex than humans’, as it has to differentiate between incoming and outgoing fire, and between gunfire and other noises such as cars fireworks or cars backfiring. 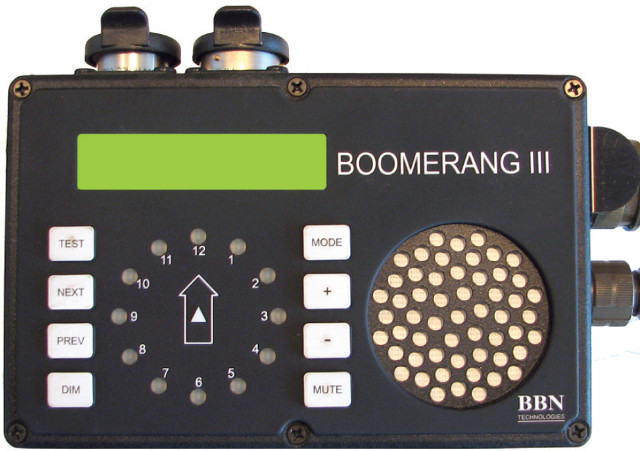 The Boomerang display panel is shown above. Range and elevation are displayed on the green digital readout, and the azimuth is indicated on the clock display. This data is combined on the small circular LED panel in the bottom right-hand corner.