There used to be a sign outside my physics classroom:

This is unfortunately very true. Many classroom experiments end with me saying “what you should have seen…” or “what should have happened…”.

The Cooling Curve of Stearic Acid

In this experiment we’re attempting to show that the freezing process gives out energy; or alternatively that the melting process requires an input of energy. This energy is called the latent heat of fusion.

This experiment is often carried out using stearic acid (C18H36O2), which is particularly suitable as it’s fairly non-toxic and has a melting point of 69.5°C which is easily achievable with a water bath and a Bunsen burner. What pupils usually do is heat a test tube of solid stearic acid in the water bath, taking temperature readings every minute until all the stearic acid has melted.

What this data should show when plotted on a graph is a flat section where the thermal energy from the Bunsen burner is going into weakening bonds between particles rather than raising the temperature. Unfortunately, this rarely works. Pupils find it very difficult to isolate any particular section as flatter than the rest.

This creates a graph that looks like this (I cheated and used a datalogger to record my data): 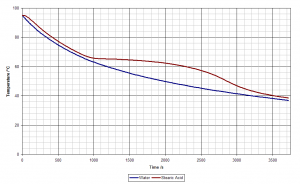 This experiment requires a bit more preparation, and a little bit more work as pupils have to record two sets of temperature data, but I think it’s worth it.

3 thoughts on “Experiments That Actually Work: Latent heat of fusion”