(Please note: I didn’t say this was necessarily a better system, just that it is more logical. I still can’t believe I spent this much time on this total non-issue.)

There are many, many currency redesigns on the internet. But everybody always concentrates on redesigning the paper currency; very rarely does someone look at redesigning the coins. I’m far from a  graphic designer, but what I can do is look at the size and shape of the coins.

Clearly this makes no sense at all. The 1p and 2p coins are both bigger than the 5p, and the 10p is bigger than the 20p. The 2p coin is heavier than the 1p, 5p, 10p and 20p coins. There are four different materials used, and even though both the 20p and 50p coins are made out of cupro-nickel, the copper-to-nickel ratio is different, which must make manufacturing them more difficult.

There are a number of reasons for doing this. The 1p and 2p coins are now essentially useless for actually buying anything (which is why many countries have got rid of their 1p/2p equivalents), and the UK 2p coin is particularly big and heavy. Also, it will help when we want to scale the sizes of coins logically.

Since we have a fiat money system, we don’t need coins to be made out of different materials, and visual appearance isn’t important, as people will be able differentiate between our new coins using other factors. We should just use the cheapest material, which is nickel-plated steel.

As demonstrated above, the sizes of UK coins currently makes no sense. We want the size of our coins to be proportional to their value, so that the £2 is larger than the £1, and the £1 is larger than the 50p and so on. (This has the useful side effect of making less “powerful” or less “useful” coins smaller and lighter, so that they take up less space in your wallet.)

However, given that we don’t want our new coins to be significantly smaller or larger, or lighter or heavier than our existing coins, we cannot vary size linearly with value. If we did this then the £2 coin would be forty times bigger than the 5p coin, and one of them would have to be either unmanageably small or unmanageably big.

After some relatively simple calculations, we end up with the following:

Old £1 coin shown above for scale.

Most of the coins are similar in size (the 5p and £2 have exactly the same diameters), but there are a couple of notable differences.

The change in properties are easier to understand via graphs. 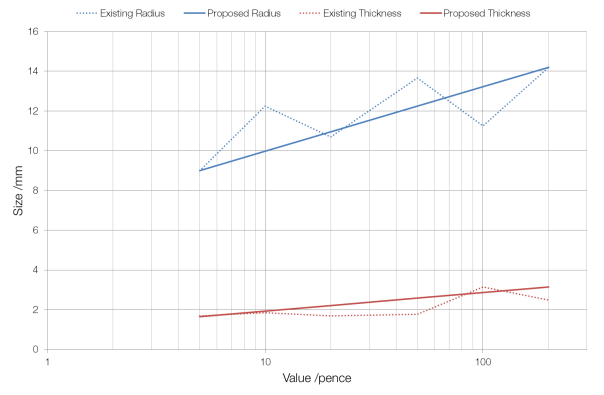 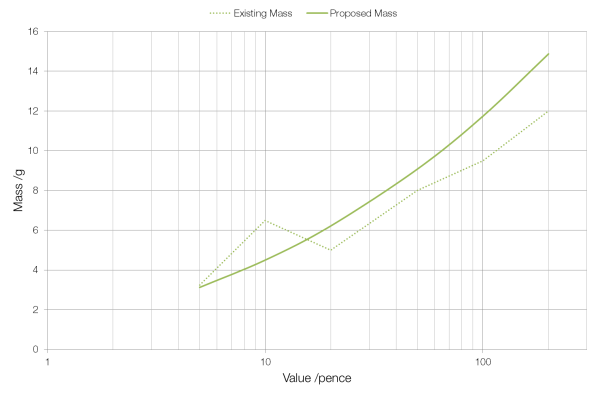 As you can see, the proposed masses are higher than the existing masses for all but the 5p and 10p coins. However, considering the removal of the 1p and 2p coins and after running some extensive Monte Carlo testing, I can confidently say that your average pocket full of change will now weigh less. (It would not be difficult to use a less dense material than nickel-plated steel if weight proved to be a problem. We could also reduce the thicknesses of the coins, making the 2.5 mm thickness of the £2 coin our maximum.)

The logic of using a logarithmic system is further demonstrated when considering adding the £5 coin (which is really only a collectors’ item) into our system. The existing £5 coin is enormous: 39 mm in diameter and 28 grams in mass; in our new system it is a svelte 31 mm and only 19.8 grams. We could therefore replace some of our paper money, which requires frequent costly replacement, with longer-lasting coins.

Existing £1 and £2 coins shown for scale.

Use by the blind

Unlike the current system, our new proposed system uses only circular coins: we do not use shapes of equal width as with the current 20p and 50p coins. This could make them more difficult for blind users to deal with.

Our new coins have a greater variation in mass than the existing coins, and this should make differentiating between them by feel easier. Also, the diameter:thickness ratio changes more noticeably (and of course, more consistently) than existing coins: coins become “fatter” relative to their diameter as their value increases. 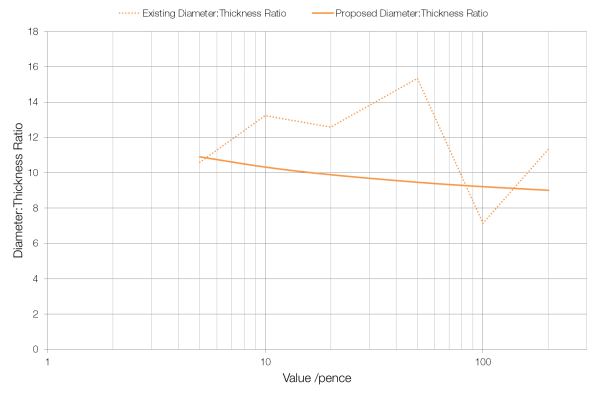 The problem of blind users is easily fixed by using different edges on our coins, as is currently done with Euro coins: the 2¢ coin has a groove around its edge, the 10¢ coin has fine “scallops” on its edge, the 20¢ coin uses a “Spanish Flower” design, the €1 coin uses interrupted milling and the €2 uses a fine-milled edge with lettering. There are more than enough different options for blind users to easily differentiate between coins. 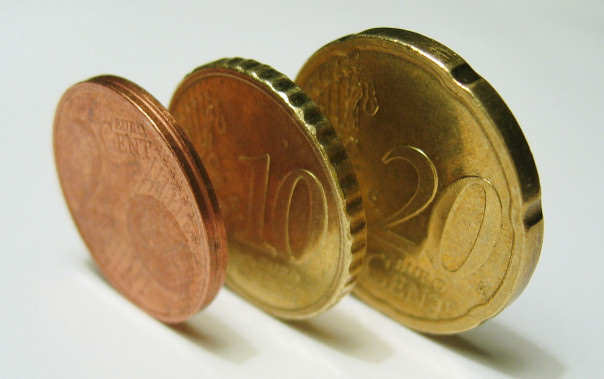 My choice would be for every second coin (i.e. 10p, 50p and £2) to use a scalloped edge, as the remaining coins would then different enough either by size or by feel (the scallops are easier to feel than fine milling) to differentiate between. Obviously, extensive testing with blind users would be necessary to iron-out any problems.

None. This is clearly a brilliant idea.

* The difference in the number of significant figures should correspond to different tolerances, but I wouldn’t be surprised if it’s a mistake by the Royal Mint.

In case you missed the previous post on the subject, the UK’s new “silver” coins are magnetic. 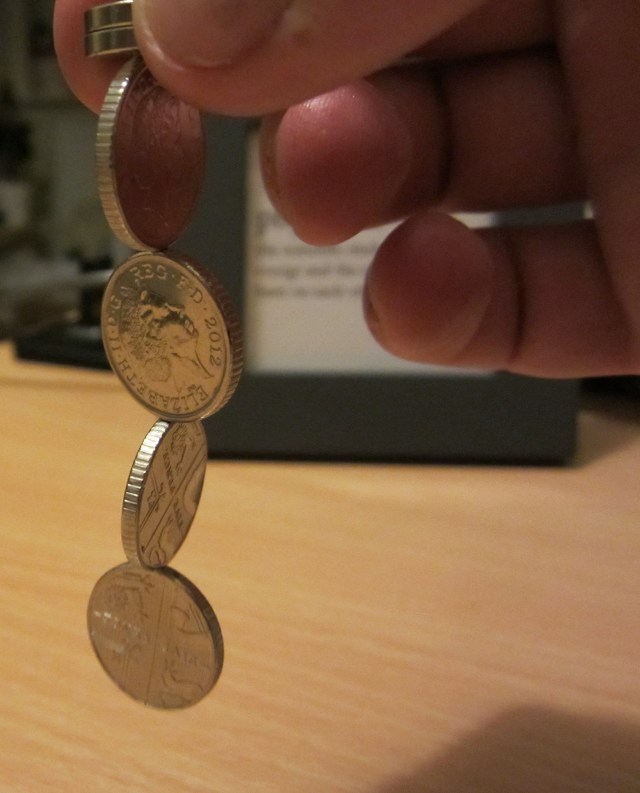 Circular objects roll because a circle is a shape of equal width. No matter where you measure from, the distance from one side to the other (through the centre) is the same. But circles aren’t the only shape with this property. 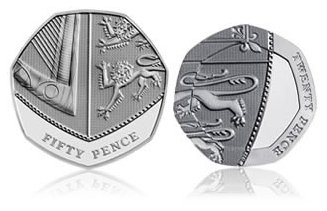 Two British coins are shapes of equal width: the 20p (21.4 mm) and 50p (27.3 mm) coin. Having an equal width makes the coins able to roll and prevents them from getting stuck in machinery. Shapes of equal width also make good manhole covers; because no “side” is any shorter than any other, it is impossible for the cover to fall down the manhole. Circles are easiest to make which is why most manhole covers are circular. 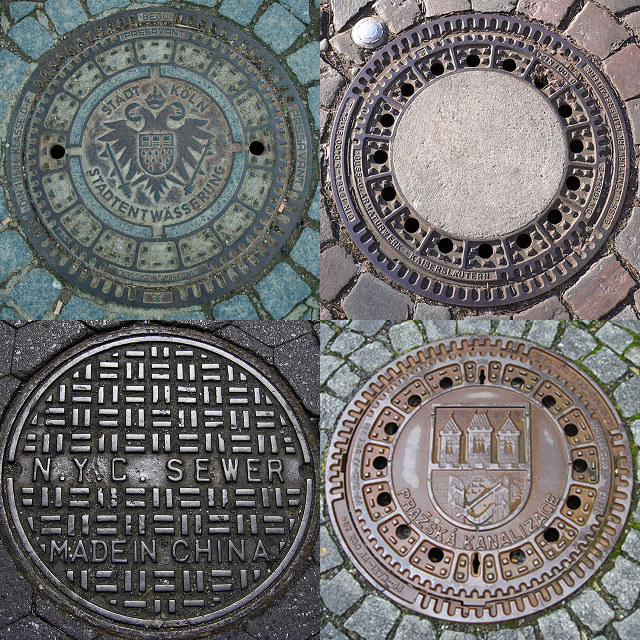 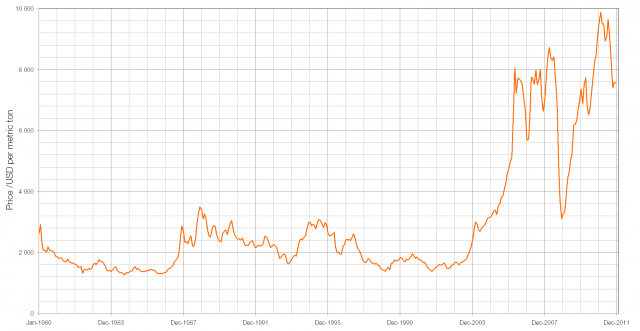 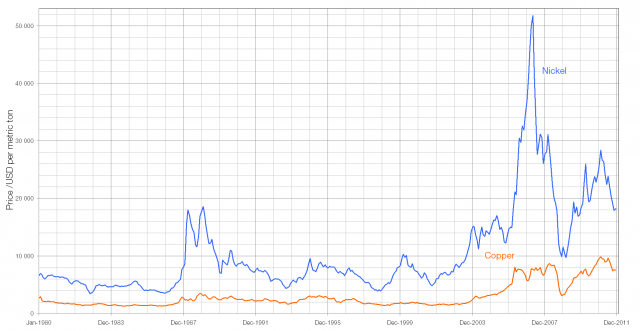