Imagine that you’re trying to rank items that people have either voted for or against. What is the best way to do this?

The correct method to use in this binomial case is to use the lower bound of Wilson’s score interval:

This is a fairly imposing equation, but what’s important is what it does, not how it works.

When ranking items using Wilson’s score interval we are still considering the for-against ratio, but we’re also taking into account the uncertainty created by having a different number of votes for each. For example, consider the following four items:

As you can see, the ratio for each item is the same, but Item 4 received ten times the votes of Item 1 and should therefore be ranked higher. 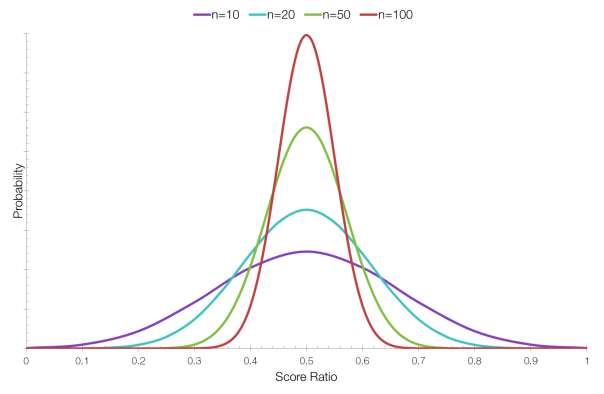 In the graph above, each item has the same score ratio, but the curve for Item 4 (n=100) is much sharper around 0.5 because there is less uncertainty about whether it has the “correct” score. An item with only 10 votes might have a “correct” ratio of 0.5, but it’s less likely than for an item with 100 votes.

If we now calculate the lower bound of Wilson’s score interval, we obtain the following results which we can then rank correctly: 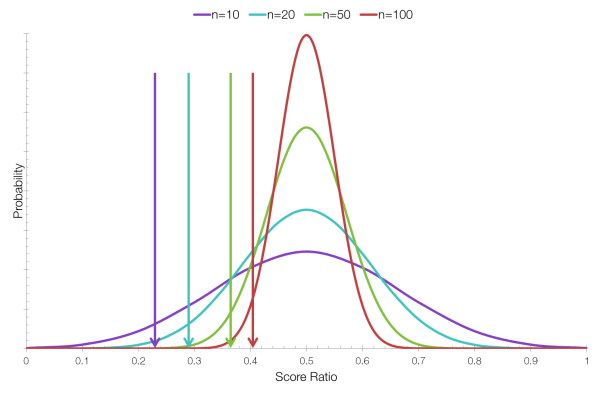 The position of each arrow indicates the lower bound of the Wilson score interval.