If births were evenly distributed throughout the year (i.e. a 1 in 365 chance of being born on any given day) then the graph of number of births against birth month would look like the one below: 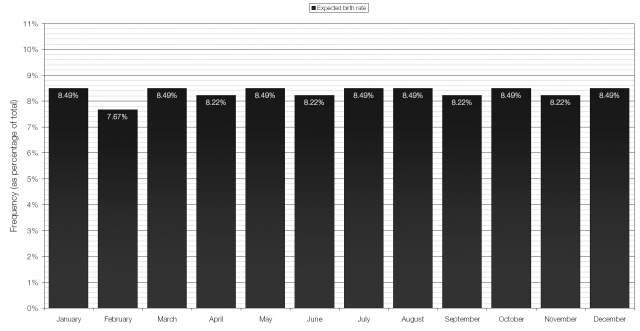 I took the data from nearly a thousand pupils and looked at how their dates of birth compared with the expected values. (Included with the data are error bars of one standard deviation.) 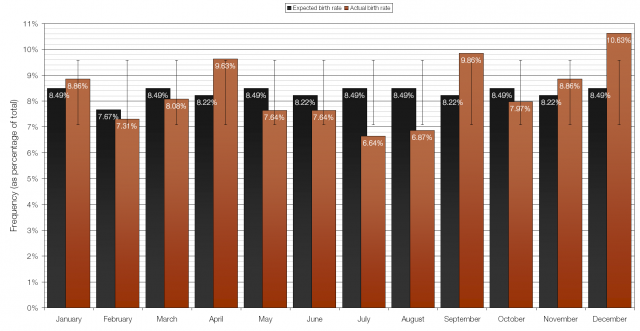 The results for April, September and December (particularly December) show birth rates above what would be expected if births are random, and the results for July and August show depressed birth rates.

Considering the months where births are more likely than they should be and working backwards we find the most likely “sex months” to be March, July and December. These seem fairly sensible as all of these months coincide with major holiday periods: Easter, the long Summer Holiday and Christmas/New Year. People are more likely to be “celebrating” and to have more free time during these periods, and March and December have long, cold and dark nights when people are more likely to stay indoors in the evening than go out.

The “sex months” for the lowest birth rates are more puzzling: October and November. I suspect that it has to do with Seasonal Affective Disorder (SAD) and that the generalised depression that comes with SAD includes reduced sex drive; this is combated come December by the general presence of good cheer and plenty of alcohol to lower inhibitions. It is also possible that parents are deliberately choosing when to conceive in order to avoid their child being the youngest in the school year, something that has been shown* to have a negative effect.

Update: Thanks to @S3ym5n I’ve now included national data for 2010. 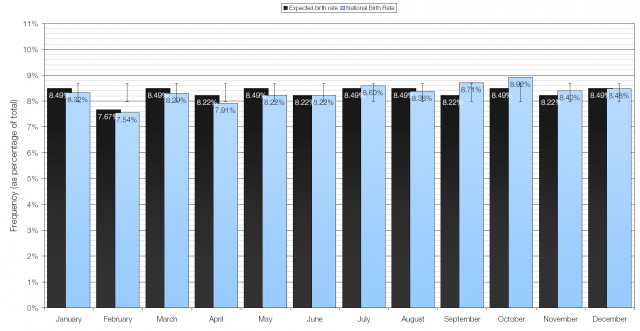 In the national data it is September and October that show birth rates above what is expected, making December and January the most popular sex months. April appears to be the only month with a significantly lower birth rate, making July, when people are out and about in the nice weather rather than stuck indoors, the least popular sex month.

There is relatively little variation in birth rate from year to year: 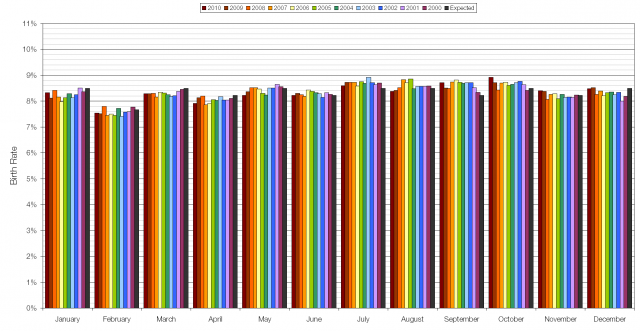 One thought on “Patterns in birthdays”