(This post was prompted by Samoa’s decision to jump forward a day by moving the international date line.)

“What’s the time?” seems like a simple question, but it’s not. There are many different ways of measuring time.

Universal Time is based on the rotation of the Earth, measured using observations by the International Earth Rotation and Reference Systems Service (IERS); it replaced Greenwich Mean Time (GMT) in 1928. The IERS uses a network of stations across the globe to perform Very Long Baseline Interferometry (VLBI) of 212 distant objects (mainly quasars) outside our Milky Way galaxy. During VLBI simultaneous readings from stations a long distance apart are compared and the differences between them used to calculate the distance to, and position of these extra-galactic objects. By combining the VLBI readings with lunar ranging and GPS satellite orbit data the principal form of Universal Time, UT1 is calculated.

Coordinated Universal Time (UTC) is the world’s time standard; if you want to know what the current time is, you want to know what UTC is. It is based on International Atomic Time (TAI) and is always kept to within ± 0.9 seconds of UT1. If it ever falls outside of this range a leap second is introduced by IERS to correct the difference. The difference between the two arises because TAI assumes that a day is a perfect 86400 seconds long (24×60×60) whereas in reality the Earth’s rotation is irregular, overall slowing by about 1.7 milliseconds every century.* 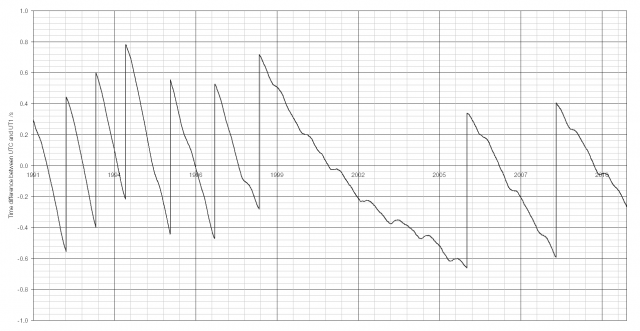 The last ten years’ of data is shown above; a sharp vertical line indicates the introduction of a leap second. The last leap second was at the end of 2008, taking the difference between UTC and UT1 from -0.591 to +0.409 seconds. Since 1999 there have been far fewer leap seconds (two in the ten year afterwards, eight in the ten years before). The Earth’s rotational speed increased in 1999 for some unknown reason, though there may be some link with earthquakes.

TAI is the average time from more than two hundred caesium atomic clocks at about seventy laboratories across the world; every month the data from these clocks is gathered by the International Bureau of Weights and Measures Bureau (BIPM) and published to participating organisations (e.g. May’s data). TAI and UTC were synchronised in 1958 but since TAI never includes leap seconds it is gradually moving away from universal time and is currently 34 seconds ahead of UTC.

Each GPS satellite contains four caesium atomic clocks that were synchronised with UTC in 1980. Leap second corrections are never applied to GPS clocks so GPS time is now 19 seconds behind TAI, putting it 15 seconds ahead of UTC. This offset is included in the GPS time signal and receivers usually apply the correction automatically.

* The pull of the Moon increases the length of the day by 2.3 ms/century but the increase in the height of land due to the melting of glaciers decreases it by 0.6 ms/cy.