The graph below shows the composition of the entire Universe. 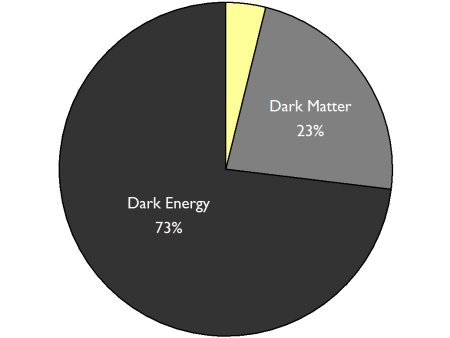 Everything else in the Universe? We have no idea.

Let me say that again: 96% of the Universe is made up of something that we don’t understand. Current thinking is that it’s divided into two parts: dark matter and dark energy.

In 1933 astronomer Fritz Zwicky at Caltech was looking at the rotational speed of galaxies in a cluster called the Coma cluster and noticed that galaxies were rotating much faster than they should have been – something invisible was causing a gravitational force that kept them moving faster than they should have done. This effect is observed throughout the Universe and we now call this invisible something Dark Matter. And we have no idea what it is.

In 1998 astronomers from the Supernova Cosmology Project at Lawrence Berkeley National Laboratory noticed that the further away a supernova was, the faster it was moving away – basically the expansion of the universe was accelerating! There was no explanation for this: the solution was Dark Energy. And again, we have no idea what it is.

It’s worth bearing in mind that Dark Matter and Dark Energy are just ideas; we don’t know for certain that they exist or that they’re the solution to the problems mentioned above; there’s no guarantee that what’s called the ?CDM model of the Universe is even correct! There could be something else entirely at work!