Statistics from the Office for National Statistics (via the Department of Transport) and the Motor Cycle Industry Association show that (for the year ending December 2009) motorcyclists make up 2.6% of road users, and 21.2% of road deaths.* So how dangerous is it to ride a motorbike?

This is really a question of quantifying risk, and that’s not something we’re very good at. But let’s take a look at the statistics: 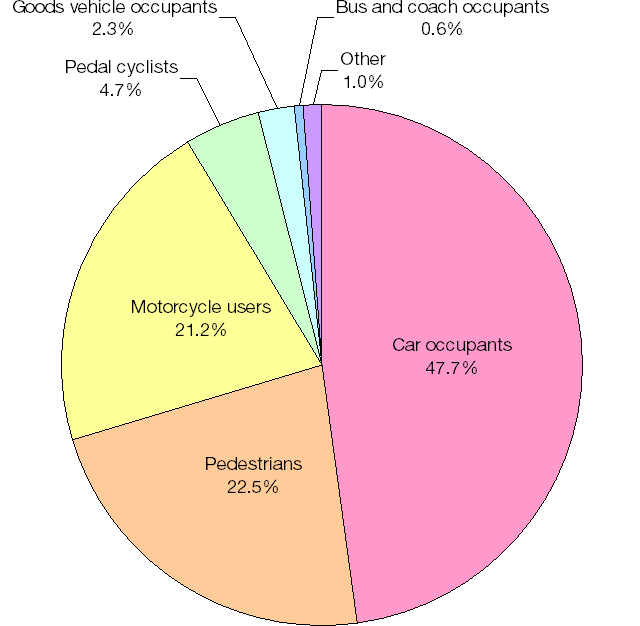 There were 2222 “all road user” deaths in 2009, of which 472 were motorcyclists. If motorcyclists were killed at the same rate as they are present on the road then we would expect only 58 (well, 57.7) of the 2222 dead to be motorcyclists. Can we therefore say that 414 motorcyclists died who “shouldn’t” have died? Can we say that the rate of motorcyclist deaths is 8.14 times what it “should” be?

How likely are you to die on the road?

85.9 people are killed or seriously injured on the UK’s roads per billion motor vehicle miles. That means that if you drove a billion miles (more than eleven times the distance from Earth to the Sun) in one vehicle you would expect 85.9 deaths (or serious injuries) to occur. To put that in more manageable terms, if you drove the UK average of 8000 miles per year you could expect to kill or injure 0.000687 people (per year). To kill or seriously injure one person you would either have to drive 8000 miles per year for 1455 years, three months, five days, twenty hours, forty minutes and thirty-one seconds; or drive 11 641 444 miles per year.

If you started driving at midnight on the morning of 1st January of zero AD you could expect to kill or seriously injure someone (or yourself) by twenty to nine on the evening of 5th March 1455, a month or so before Pope Calixtus III takes over from Pope Nicholas V as the 209th pope (the current pope, Benedict XVI, is the 265th). If you decided to drive the eleven million miles in one year that would require an average speed of 1329 miles per hour, nearly two and a half times the speed of sound.

Whichever way you look at it, you’re pretty unlikely to die on the roads.

But more likely if you’re on a motorbike.

* Doing research for this post I also discovered that in 2008 the DVLA licensed 319 “lifeboat haulage vehicles”, nineteen “mine rescue vehicles” and three “digging machines”.