The Earth orbits just one of the 200-400 billion stars that make up the Milky Way. This star, the Sun, orbits at a distance of about 27000 light years from the Galactic Centre, travelling at 220 km/s (one mile every seven thousandths of a second).

The Milky Way is about 100000 light years across, but only about 1000 light years in height, making it about one hundred times wider than it is tall. To scale, viewed from side on, it would look like the line below:

With a thickness of 1.2 millimetres and a diameter of 120 millimetres a standard CD or DVD has exactly the same thickness:width ratio as the Milky Way; you could correctly describe our galaxy as “CD-shaped”.

Update: I’m reliably informed that a thickness of 1000 light years is incorrect, and that the true thickness is probably somewhere around 2000-3000 light years, and could be as large as 6000 ly. (It also depends very heavily on your definition of the “edge” of the Universe.) 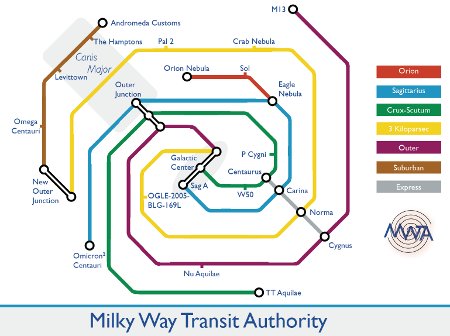