There are two main ways of giving longitude and latitude: in degrees, minutes and seconds, and in decimal degrees. For example: the current headquarters of the Institute of Physics could be given as 51° 31′ 18.0721″N, 0° 8′ 42.8759″W in degrees, minutes and seconds format; or as 51.521687, -0.145243 in decimal degrees. (Note the absence of cardinal directions in the decimal degrees format: positive latitude values are taken to be north, with negative values being south, and positive longitude values taken to be east, and negative values west.)

Lines of longitude are great circles, each one the same size, running around the Earth and crossing both the north and south poles. When quoting the position of an object on Earth’s surface in terms of its longitude, the degree of precision is not affected by the longitude in question.

Unlike lines of longitude, not all lines of latitude are the same length. At 80° latitude the length of the line of latitude is only 17.3% of that at the equator. This means that the level of precision changes with latitude – each division of the latitude line is much smaller at you approach the north pole. 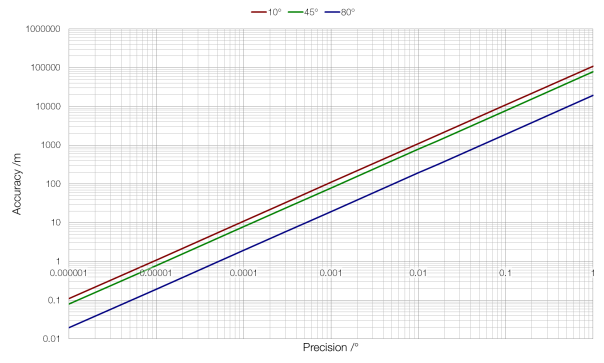 As you can see in the graph above, the change is not linear with latitude. The same 35° difference in latitude yields very different results in terms of accuracy.

This means that different locations will need to use different degrees of accuracy in their GPS coordinates if you want people to be able to find their way around. At Quito, near the equator at 0.23°N, a precision of 0.001° would lead to an accuracy of ± 111 metres, but at Helsinki, much further north at 60.2°N, this accuracy is improved to ± 55 metres.

“GPS” is actually a brand name, and like “hoover” or “kleenex” has become a proprietary eponym, used to refer to a category of products despite just being one product in that category. There are other satellite navigation systems that offer the capabilities of GPS. 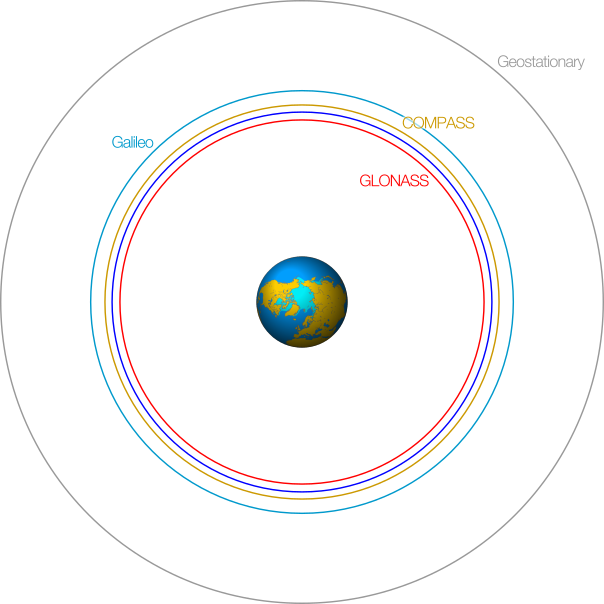 GLONASS (Globalnaya Navigatsionnaya Sputnikovaya Sistema) is the most developed of the GPS alternatives, and is operated by Russia. GLONASS uses twenty-nine satellites compared with the thirty-two satellites that make up the GPS constellation, and the GLONASS satellites are in a slightly lower orbit. Due to the orbital position of the satellites, GLONASS is slightly less accurate overall than GPS, but more accurate at high latitudes (both north and south) in locations such as Russia, because it is inclined at an angle of 65° to Earth’s equator as opposed to GPS’s 55°.

Many mobile phones already use a combination of GPS and GLONASS, and the availability of more satellites means that it is easier to get a line-of-sight satellite lock than when using GPS alone.

DORIS (Doppler Orbitography and Radiopositioning Integrated by Satellite) is a French system that operates the other way around to other satellite navigation systems: each DORIS satellite receives signals from between fifty and sixty ground stations, rather than it being the satellites that are broadcasting the signals. There are no dedicated DORIS satellites, but DORIS receivers are fitted to a number of satellites such as TOPEX/Poseidon and Jason.

The accuracy of DORIS is lower than GPS as ground positioning is not its primary purpose; it is designed to measure the position the orbits of the satellites aboard which DORIS receivers are fitted and to measure the height of the oceans.

BeiDou was a test system developed by China that used four satellites and covered China, India, parts of Japan and other countries. 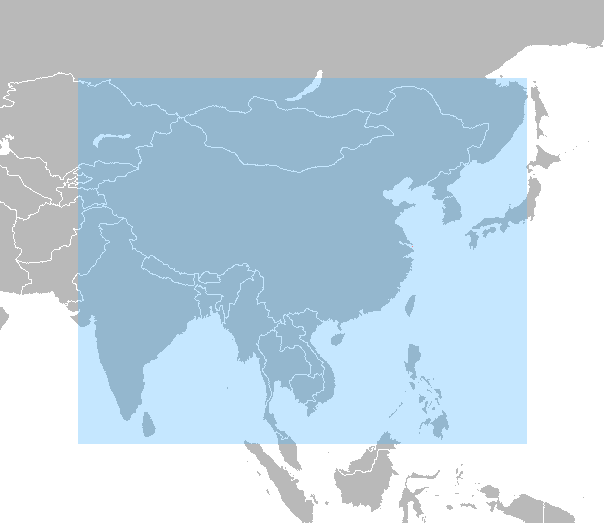 The BeiDou system is being replaced to create BedDou-2 or COMPASS, and now uses sixteen satellites which cover the Asia-Pacific region, including Australia. By 2020 COMPASS should be able to offer global coverage, using thirty-five satellites, including five in geostationary orbit.

Galileo is a European satellite navigation system run by the EU and the European Space Agency; it plans to offer one-metre accuracy (compared with GPS’s fifteen-metre accuracy) and a search-and-rescue function for free, and will use a constellation of thirty satellites. Higher-precision (centimetre-resolution) data will be available to paying users. Five Galileo satellites have been successfully launched and placed, but the Soyuz rocket and Fregat “space-tug” used for the sixth satellite did not place it into the correct orbit.

Because Galileo satellites are placed in a higher orbit (23 200 km) than GPS satellites (20 200 km), there is a higher chance of being able to achieve a line-of-sight satellite lock, particularly in the “urban canyon” environment of modern high-rise cities. Galileo will also offer better coverage at high latitudes (e.g. northern Norway), where GPS coverage varies during the day due to the orbits of the GPS satellites.

It is highly likely that modern devices will use a combination of GPS, GLONASS and Galileo when the Galileo system becomes fully operational.

IRNSS (Indian Regional Navigation Satellite System) is an Indian satellite navigation system, the development of which is at least partially due to a desire to avoid reliance on foreign navigation systems. (During the India-Pakistan Kargil War in 1999, the US denied India access to GPS data.)

The system will consist of seven satellites in geostationary orbits, and will offer accuracy of below twenty metres within a radius of 3000 km of the centre of India, increasing to below ten metres over mainland India.

QZSS (Quasi-Zenith Satellite System) is a Japanese system that is not a navigation system of its own, but rather augments the GPS system (it send signals compatible with standard GPS receivers). It will offer better coverage than GPS within Japan’s “urban canyons”, as the orbits of the four QZSS satellites will ensure that one satellite is always directly overhead of Japan. QZSS is specifically targeted at mobile applications, and will offer data transfer capabilities alongside positioning information. 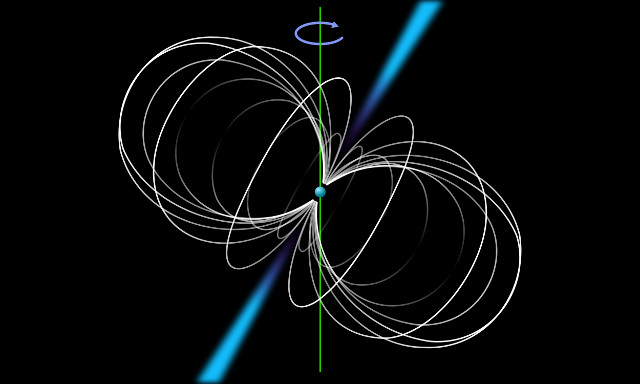 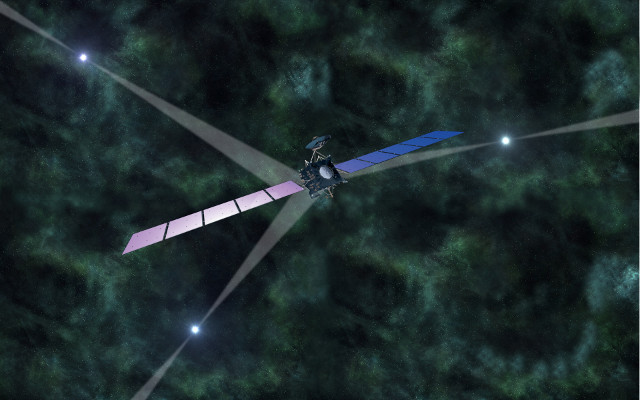