This timeline has been pieced together from numerous sources; there may be inaccuracies and many of the times are only approximate. All times given are in Japan Standard Time (UTC+0900). The most recent information is at the bottom of this post.

END_OF_DOCUMENT_TOKEN_TO_BE_REPLACED

During the March 11 earthquake Units 1, 2 and 3 of the Fukushima I Nuclear Power Plant shut down automatically. Diesel generators kicked in to run the backup cooling system and extract excess heat from the core. Unfortunately, these generators were damaged by the subsequent tsunami and failed about an hour after the ‘quake struck. Moving in new generators, or giant batteries would be very difficult in the best of situations, but with the damage to infrastructure caused by the earthquake and tsunami it was impossible.

The Fukushima I Power Plant is a 4.7 gigawatt 6-unit Boiling Water Reactor (BWR) complex. Although fission reactions stopped when the reactor shut down (when it was “scrammed“) the residual heat from radioactive decay within the nuclear fuel presents a problem. Unlike other reactor designs (e.g. the Advanced Gas-cooled Reactors used in most of the UK’s nuclear power stations) the BWR design cannot cool itself passively and requires power to run the coolant systems. With no supply from the electrical grid, and no diesel generators, no power was available.

Without a functioning cooling system the temperature, and therefore the pressure, inside the reactor vessels continued to increase. The pressure inside the Unit 1 and Unit 2 containment structures increased beyond their design limits. In order to reduce this pressure some radioactive steam was released from the primary cooling circuit, though most radiation will have been removed by filters before the steam reached the atmosphere.

The steam is radioactive because neutrons from the reactor bombarding the coolant water transmute the water’s hydrogen atoms into tritium (hydrogen-3) atoms to create radioactive tritiated water. Tritium is a lightly radioactive beta emitter and beta particles cannot travel very far in air and do not usually penetrate the skin. The steam would also have contained some nitrogen-16, formed in an ‘np’ reaction when neutrons bombarded the water’s oxygen atoms, but as nitrogen-16 has a half-life of only 7.1 seconds it does not present a significant risk.

Initially it seemed that neither the Unit 1 or Unit 2 reactor vessels had been significantly compromised. (The roof and walls of the buildings surrounding the reactors are deliberately designed to blow away, to prevent the force from being focused inwards on the reactor.) However, white smoke has now been seen coming from Unit 3 which suggests that there may be damage to the reactor or the containment structure; this would seem possible as the explosion at that site was noticeably larger than the explosion at Unit 1.

Alterations were made to the walls of the Unit 2 building to vent any hydrogen produced there, but nonetheless there was an explosion at the site. This explosion seems more serious than the first two, damaging part of the reactor’s pressure supression system. An “abnormal noise … emanating from nearby the pressure suppression chamber” caused workers to be evacuated from the area. A 20cm crack in the maintenance pit underneath the reactor is allowing radioactive contamination to seep into the sea surrounding the plant.

The problems at Unit 3 may be more dangerous than at Units 1 and 2 because Unit 3 uses mixed oxide (MOX) fuel which contains a small percentage of plutonium oxide as well as uranium oxide; this “burns” at a higher temperature and contains more radio-toxic fission fragments than pure uranium oxide fuel.

Unit 4 was shut down at the time of the quake and the reactor’s core, along with spent fuel rods, was stored in the spent fuel pond towards the top of the building. The failure of the coolant system again led to the formation of hydrogen and an explosion damaged the roof and walls of Unit 4 and caused a fire. This released radioactive material into the air, as the spent fuel ponds are not surrounded by containment vessels in the same way as the reactors are. There have been sporadic fires, and firefighting efforts are being hampered by releases of radiation from Units 1, 2 and 3, but it seems that the fires are currently extinguished.

Seawater is being pumped into the reactor core of Units 1, 2 and 3 and the containment buildings of Units 1 and 3.  Workers from the fantastically named Hyper Rescue Squad and the Japanese Self Defense forces have been spraying water onto the reactors to cool them, both from the ground using water cannons and from the air using a modified lead-lined Chinook helicopter. Replacement power lines have been laid and connected to the plant but it is not clear how well the cooling systems (the ECCS and RCIC) will operate considering all the damage that has occured.

The level of radioactivity at the site is a little unclear and will vary across the site according to the location of any leaked material. The most recent reliable figure I could find reported that the border of the site is at about 265 microsieverts (µSv) per hour, significantly above the normal background but not hugely dangerous. The average exposure due to natural background in the UK is 2600 µSv/year; in Cornwall, where there is a lot of radioactive granite the background dose is 7000 µSv/year; and the residents of Ramsar in Iran receive the highest natural background radiation dose in the world at 260000 µSv/year. For a single dose received in a single event, mild radiation sickness will set in at about a million microsieverts.

There does not currently seem to be a wide dispersion of radioactive material outside the border of the plant. Workers have been moved out from, and back to, the plant according to surges in the levels of radioactivity, but current exposure levels for workers are unknown. It is known that one worker did receive a dose of 106000 µSv, enough to cause mild bone marrow supression but not enough to be fatal; and two workers received radiation burns after walking through radioactive water in Unit 3. 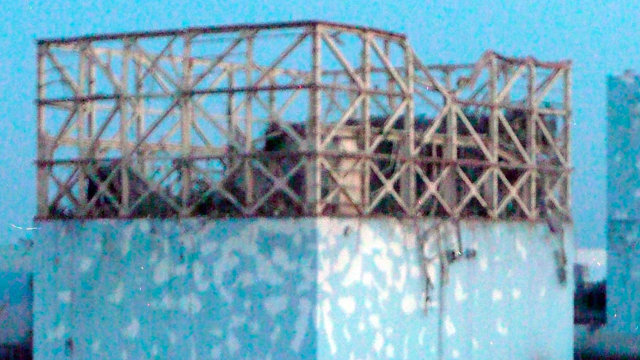 The roof of the Unit 1 building was blown off by the hydrogen explosion.

Fukushima will not be “another Chernobyl” or “Japan’s Chernobyl”. The Fukushima reactor does not have a combustible core made of graphite like RBMK-type (Chernobyl-type) reactors do and the Japanese Nuclear Safety Agency has said that damage to the reactor vessel is minimal. The authorities have now combined the incidents at Units 1, 2 and 3 – previously rated individually as Level 5 accidents – into one Level 7 incident.

One of the biggest concerns is that the reactor may undergo a meltdown. This is where the heat inside the reactor becomes great enough to melt the uranium oxide fuel itself. As uranium oxide melts at over 2800°C this molten fuel would causes significant damage to the reactor and make a release of radioactive material more likely. All three reactors are being successfully cooled with sea water, and boric acid is being added to absorb excess neutrons and decrease reactivity; a full meltdown at Fukushima is very unlikely.

The production of hydrogen indicates that the fuel rods were exposed (i.e. not covered by water) for at least some time and this appears to have resulted in the release of some fission fragments. Fission fragments are the “pieces” left over after splitting the big and heavy uranium atoms; they are usually either short-lived and release high-energy radioactive particles, or long-lived but lower energy. (It is the radioactive fission fragments that are largely responsible for the decay heat.)

So far interest has focused on two particular radioactive fragments: iodine-131 and caesium-137. Iodine-131 is significant because the body absorbs it just like normal iodine-127 and it accumulates in the thyroid gland where it is used to produce the thyroid hormones; this can lead to thyroid cancer. The eight-day half-life of I-131 means that it does not present a long-term risk. Caesium-137 is water soluble and has a half-life of thirty years and therefore tends to stay in the body and environment; Cs-137 is responsible for most of the remaining contamination in Chernobyl’s Zone of Alienation.

Trace amounts, billionths of a gram, of iodine-131 and caesium-137 have been detected in water around Fukushima. This level of contamination poses absolutely no danger whatsoever to human health. Were I able to get a class of Fukushima water I would gladly drink it to prove my point.

Iodine tablets are often issued to residents living around nuclear power plants. Taking the iodine tablets, which are made of potassium iodide, before exposure to radioiodine, prevents the uptake of radioiodine because the body already has all the iodine it needs. Exposure to caesium-137 is treated with Prussian blue (iron ferrocyanide) which binds to the Cs-137 and speeds its removal from the body. Both treatments are fairly successful if administered promptly and with good medical support, as is available in Japan. Nobody, in Japan or elsewhere, should take iodine tablets unless instructed to by a medical professional.

“Fallout” is a term used to refer to radioactive contamination of an area and it is fission fragments (along with the tritiated water referenced above) that would make up any fallout from Fukushima. The idea of fallout drifting across nearly 9000 km of Pacific Ocean and killing people on the West Coast of the USA is absurd. Our ability to detect radioactive contamination is very good so any contamination from Fukushima will be detected; detection does not equal danger however. Imagine dumping out a bag of flour at Fukushima in Japan – are you worried about flour contamination in Los Angeles or San Francisco?

As time goes on the situation at Fukushima improves very quickly. It is decay heat that is causing the majority of the problems and in the short term decay heat decreases very quickly. Upon shutdown decay heat is about 7% of the heat produced whilst running and this falls to about 0.3% after ten days. This fast exponential decay is related to the formation of high-energy short-lived isotopes in the fission process, as outlined above.

Whilst the situation may yet turn out to be more severe, it is worth noting that this is the first nuclear emergency ever declared in Japan, a country that produces more nuclear energy than any other country except the USA and France. The March 11 earthquake, at a moment magnitude of 9.0, was the most powerful ever to strike Japan and the fourth largest since records began. The energy released in a moment magnitude 9.0 quake is equivalent to nearly 900 000 times the energy released by the Hiroshima and Nagasaki nuclear attacks combined. It is a tribute to Japanese engineering and building codes that damage has not been more severe. The Fukushima plant has survived at least ten previous earthquakes and had the earthquake not been followed by a tsunami the shutdown would not have been nearly as problematic. The biggest concern for Japan now is not the situation at Fukushima but the damage to infrastructure, including power shortages. This video, from Russia Today, gives you some idea of the size of tsunami that the Fukushami plant had to deal with: