Vienna Standard Mean Ocean Water (VSMOW) is the standard water used for calibrating instruments such as thermometers. Water will freeze and boil at different temperatures depending on the mix of isotopes it contains, and VSMOW standardises these ratios so that all experiments achieve the same results. (If you want to buy some VSMOW, it’ll cost you €180 for twenty millilitres, about twenty times more expensive than inkjet printer ink.) 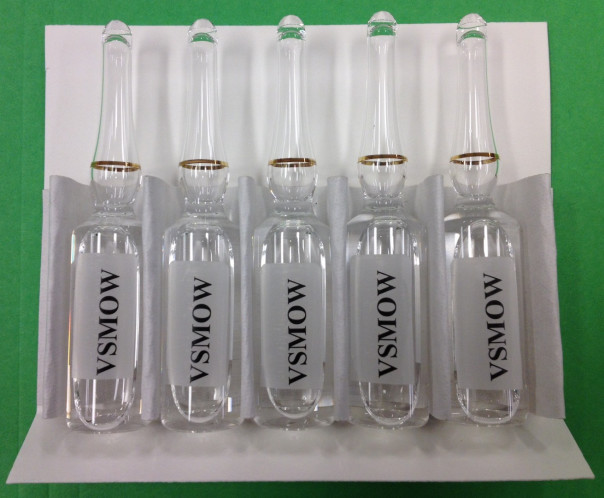 The hydrogen in water is one of three isotopes: hydrogen-1 (one proton), hydrogen-2 (one proton, one neutron, also known as deuterium) and hydrogen-3 (one proton, two neutrons, also known as tritium). Hydrogen-1 and deuterium are stable, but tritium is radioactive but has a long half-life (12.32 years). VSMOW contains one deuterium atom for every 6420 atoms of hydrogen-1, and one tritium atom for every 54.05 billion atoms of hydrogen-1. (The amount of tritium in VSMOW is so small that it is ignored for all but the most precise work.)

I tried really hard to come up diagrams to represent these ratios, but the amount of tritium is so small in comparison to the amount of hydrogen-1 and deuterium that it just disappeared every time.

My attempt at a diagram for the oxygen ratios was a bit more successful. If you enlarge the thumbnail below the blue square shows the amount of oxygen-18, and if you look really closely you can see a single green pixel in the bottom left-hand corner that represents oxygen-17. 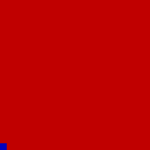