The cranial nerves are a group of twelve pairs of nerves which emerge directly from the brain, rather than from the spinal column as is the case for most nerves. 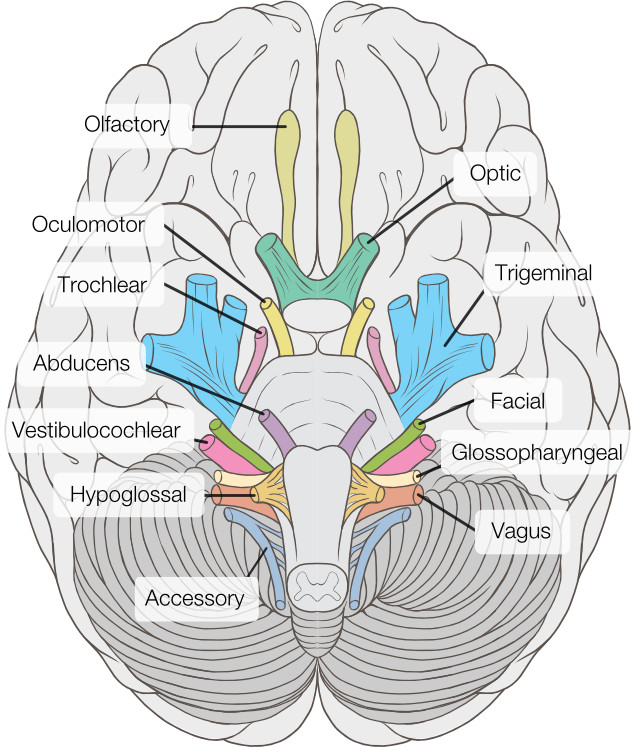 The first two cranial nerves, the olfactory nerve (CN I) that transmits the signals that make up your sense of smell and the optic nerve (CN II) responsible for sight emerge from the cerebrum (the big grey wiggly bit of your brain); the other ten emerge from the brainstem.

The oculomotor (CN III), trochlear (CN IV) and abducens (CN VI) nerves control the muscles around the eye, moving it from side-to-side and tilting it up and down. The oculomotor nerve also controls the dilation of the pupil.

The trigeminal nerve (CN V) transmits sensations from the face to the brain and innervates (activates/operates) the muscles that you use to chew.

The facial nerve (CN VII) innervates the muscles that create facial expressions and carries information from your tastebuds on the anterior (front) two-thirds of your tongue. It is also responsible for sending the signals that cause two of your three salivary glands (the submandibular and sublingual glands) to activate.

The vestibulocochlear nerve (CN VIII) transmits sound to the brain and provides information about your position in space in relation to the force of gravity. It is essential for your sense of balance and allows you to move.

The glossopharyngeal nerve (CN IX) receives taste signals from the remaining one-third of the tongue and controls the activation of the remaining salivary gland (the parotid). It also innervates the stylopharyngeus muscle that is part of the process of swallowing food.

The vagus nerve (CN X) innervates most of the laryngeal and pharyngeal muscles, controlling the voice and helping with the swallowing of food. It also transmits signals from the tastebuds on the epiglottis.

The accessory nerve (CN XI) innervates the sternocleidomastoid and trapezius muscles that rotate and flexes the neck and head. The final cranial nerve, the hypoglossal (CN XII), innervates the tongue muscles (with the exception of the palatoglossus which is controlled by the vagus nerve) and thereby helps with speech and eating and swallowing food.

One thought on “Cranial nerves”