One of the symptoms of Influenza A H1N1, also known (incorrectly) as “swine flu” is a fever – increased body temperature. It’s difficult and very time consuming to measure the temperature of every passenger arriving at an airport using conventional mercury-in-glass (or alcohol-in-glass) thermometers but luckily physics has a solution.

Every object with a temperature above absolute zero emits electromagnetic radiation. At around body temperatures this radiation is mainly in the infrared part of the spectrum. By measuring the infrared radiation that a person emits it’s possible to tell how hot that person is.

The Boston Globe’s Big Picture has a series of photographs from the H1N1 outbreak, including two photographs of infrared temperature monitoring in use. In the first photograph you can see technicians in protective suits carrying infrared thermometers; the four dots seen on the patient’s head are used to indicate the area being sampled. 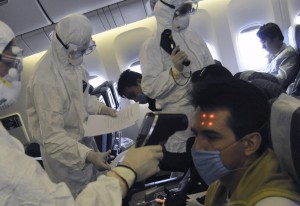 In this second photograph you can see an infrared thermogram in the background whilst a patient’s mouth is examined. 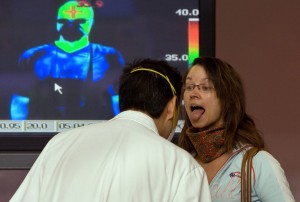 Venetia Phair, the girl who came up with the name Pluto for the newly-discovered planet, has died.