What do the following ten elements have in common?

The answer (and there is a tiny clue in some of the names) is that all ten elements were isolated from one sample, taken from a mine in the small village of Ytterby in Sweden. All of the elements are rare earth metals which occur in similar locations and have similar properties. This makes their extraction and isolation very difficult and this is where the “rare” in their name comes from.

In 1787 one of the students of Lieutenant Carl Axel Arrhenius found a dark-coloured ore that was much too heavy to be coal. Arrhenius took this ore, which he named “ytterbite”, and sent samples to various chemists for analysis. One of these chemists, Johan Gadolin, determined that ytterbite did indeed contain a previously unknown element and called this element yttrium.

In 1843 Carl Gustav Mosander demonstrated that ytterbite was actually made of three metal oxides, not one as Gadolin had thought. The original name was kept for one of these three parts and the other two elements named terbium and erbium, both after the village of Ytterby where they were found.

Erbium was then itself demonstrated to a mixture of three elements: erbium; thulium, named after Thule, a term used by early map makers for the far north where Sweden is located; and holmium, named after the Swedish capital Stockholm. Holmium was then later demonstrated to be a mixture of holmium and dysprosium, which takes its name from the Greek word dysprositos meaning “difficult to get”, reflecting the difficulty found in isolating it. 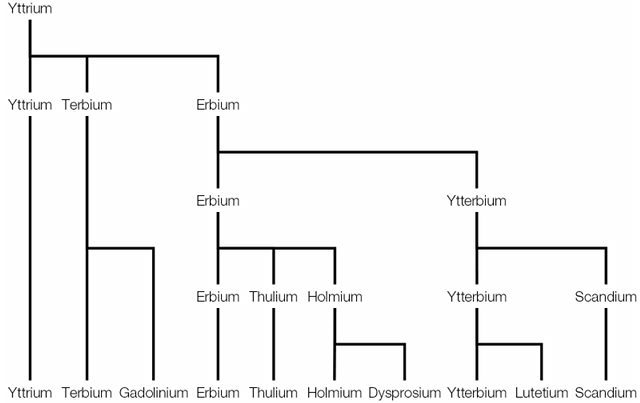 A diagram showing the order in which the ten elements were isolated.