The Half-Time Kettle Effect (HTKE) is an oft-reported part of the football season. The idea is very simple: at half-time, a large number of people watching the match will make themselves a cup of tea, using an electric kettle to do so. The HTKE is the resulting “spike” in the demand for electricity that this causes.

The National Grid is kind enough to make realtime demand data available at their website, so I decided to see what happened during the England-Slovenia game today.

Unfortunately the actual numerical data isn’t available yet via the National Grid website, so I’ve had to calculate the data from the graph itself; data is only updated once every five minutes, so that’s also less than ideal. 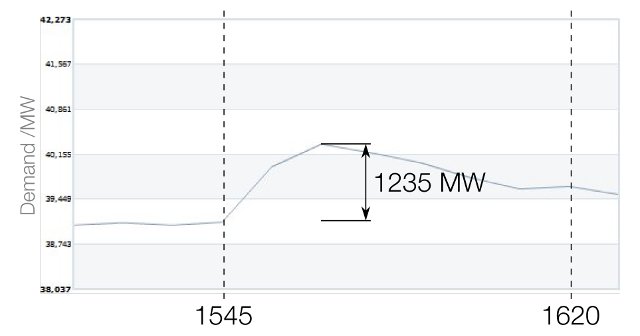 From the start of half-time at 1545 to peak consumption ten minutes later at 1555 demand jumped by 1235 megawatts to 40314 megawatts, a 3.2% jump. This is equivalent to more than six hundred thousand average (2 kW) kettles, or an average-sized coal or nuclear power station.

Chances are that the spike isn’t due to kettles alone; opening the fridge door for a beer will often cause the compressor to kick in to replace the lost cold air. Microwaving food or turning on the light to go to the toilet are probably also major contributors to the HTKE.

The blip is clearly visible on the 24 hour graph ending at 1600. 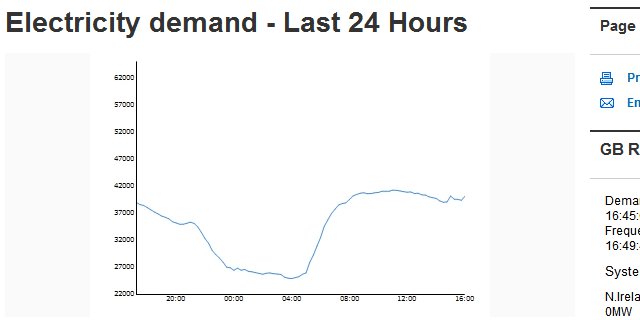